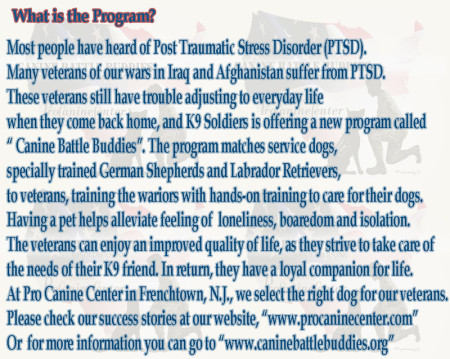 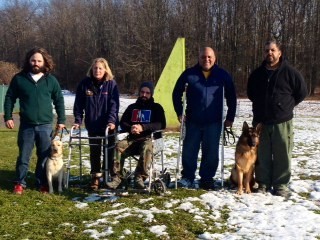 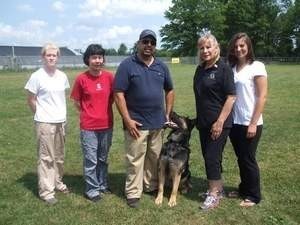 FLEMINGTON — Although most people have heard of Post Traumatic Stress Disorder (PTSD) and how many veterans of our wars in Iraq and Afghanistan suffer with it, many civilians still have trouble truly appreciating how difficult it is for these veterans to adjust to everyday life when they come home.

One veteran, Lauren Cust, came home from Afghanistan terrified to live a normal life. To protect herself from snipers, she painted all the windows in her Connecticut home black, much to her civilian husband’s discomfort. She was afraid to go out alone. She struggled with suicide. But when her daughter, Mary, was born last year, Cust knew she had to heal. One option that was open to her was the new Canine Battle Buddies program, started by local resident J.T. Gabriel. The program matches service dogs, all specially trained German Shepherds, to veterans, training the warriors with online college courses and hands-on training to care for their dogs.

“The Veterans Administration doesn’t pay for service dogs,” Gabriel explained, “but they will pay for college credits. So we have a program set up with Harcum College in Bryn Mawr, Pa., whereby the veterans can earn 10 college credits in canine care. The first four credits are online courses that veterans can take at their own pace. When they complete those, they come to Pro Canine in Frenchtown, where they get hands-on training with world-renowned dog trainer Andre Aportela, and he matches them to one of his dogs.”

Cust wasn’t sure she wanted a German Shepherd, but she thought if she had to have one, it should be a big, burly male. But as she worked with several of Aportela’s males, the matches didn’t seem to be working out. Then Aportela brought her a smaller female, a dog named Dorothy(Xena Vom Ortenberg). According to Gabriel, Dorothy took one look at baby Mary and fell in love with her, and the rest is, as they say, history.

“Dorothy saved my life,” said Cust. “She gets me out of the house, and now I feel safe going to the park. She wakes me up and licks my face when I have nightmares. When I get nervous, she licks my hands. She makes me feel more secure. I get nervous in line, and she will block people who make me uncomfortable.”

Not long after Dorothy came to live with the Custs, all the black paint came down off the windows.

“My husband was very happy,” Cust said. “And Dorothy not only saved my life. She also saved my daughter’s. Now she will grow up with a normal mom.”

“PTSD dogs are a relatively new thing,” Gabriel said. She herself got interested in matching returning warriors to dogs after sending canine supplies to dogs on the front lines in Iraq and Afghanistan through her K-9 Soldiers charity for several years.

“We noticed that handlers would rather be down range with a dog than another human being,” she said. She added that handlers often came home with less stress and were better adjusted than other soldiers. She felt sure that dogs could help the PTSD sufferers as well.

“To be a service dog, the dog must do at least three tasks specific to the handler,” Gabriel said. “These dogs may wake the veteran from nightmares, interrupt their thoughts during a flashback, block strangers from getting too close — especially in a crowd, and get them out of the house. And petting a dogs is very calming. The dog is a reassuring presence.”

After interviewing many trainers, Gabriel chose Aportela to train the dogs, not only because he was six miles away, but more importantly because of his intimate understanding of dogs and how he teaches people to think like a dog. She said this training, which is part of the college-credit program, greatly contributes to the success of her Canine Battle Buddies program.

Now, Gabriel and Aportela are taking the program a step further. They are working with members of Congress, including Representative Leonard Lance, to establish a veteran’s canine tracking team that will represent the United States in international competitions. She said tracking comes naturally to combat veterans and the dogs alike, so it’s a constructive activity they really enjoy. And, Aportela has already trained many champion trackers. He will work with the veterans and their service dogs to compete to win. Gabriel wants to open this activity to any interested veteran, and she’s seeking corporate sponsors to raise the $30,000 to $50,000 needed to cover the frequent training and travel expenses involved. Gabriel is encouraged by the interest that she’s already received from a few corporations, but she said they’ll need a lot more support.

“I don’t want the veterans to pay for anything,” she said. “They’ve served this country well, and now it’s our chance to show our appreciation and give back.”

Our training guarantee is for the life of the dog providing that ownership of the dog does not change. A full health certificate and pedigree is provided with your dog with all necessary vaccinations up to date. We also guarantee your dog to be free of hip dysplasia and elbow displacement.